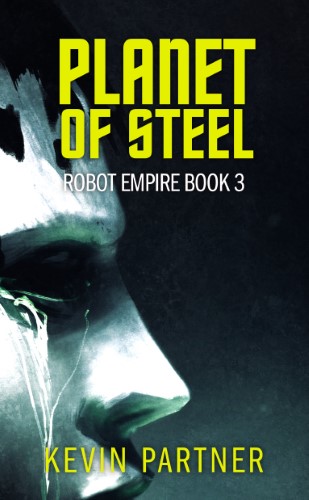 Meet the mind at the core of the Robot Empire.

A planet sized intelligence hungry to possess the secrets hidden within Arkship Dawn.

Arla Farmer is the reluctant commander of the asteroid ship, helpless in a galaxy that has changed beyond recognition since their mission began thirteen centuries ago.

Will she save her people and lead them to a new home among the stars?

And what will happen when the Robot Empire itself comes under threat from an ancient weapon intent on cleansing the galaxy of all intelligent life?

Planet of Steel is the third book in a now complete six book series. If you like the Foundation series of Isaac Asimov, or the works of Bradbury, Bear or Clarke, then you’ll love Kevin Partner’s series of fast paced space opera.

Get Planet of Steel now and discover the secret at the heart of the Robot Empire.

What readers are saying:

“This is one of the best SciFi series of the moment. Kev Partner writes books that grip the imagination and fill the mind with amazing imagery.”

“Kevin Partner has come up trumps in this new book which will take fans of Apocalyptic Sci-fi fantasy stories to a wonderful new adventure far, far away – you’ll love it!”

Find it on your favourite retailer
← Next book Previous book →